In this post I'm going to be reviewing a Japanese Drama called Million Yen Women, that I watched on Netflix. First a little background. One of my favorite things to do is watch TV. I love finding a good show and binge watching. I started watching Asian dramas my sophomore year of college and since then I've been hooked. I've watched dramas from Korea, Japan, China, Taiwan, Thailand, Turkey, Pakistan, Philippines, and India. Now I don't exclusively like shows from these Asian countries, I still watch American shows as well, but I do find myself binge watching these more often because they are usually one season with anywhere between 10-30 episodes. Short and to the point. Now there are shows that are longer but generally that is the episode range. In addition, I also watch telenovelas occasionally, but let's save that for another post. Through my blog I want to review and recommend some TV shows that I truly enjoyed and I hope you will too!

Anyway lets get on with the review of the Japanese drama Million Yen Women. I found this drama to be very interesting, quite unique, and a bit strange in a good way. 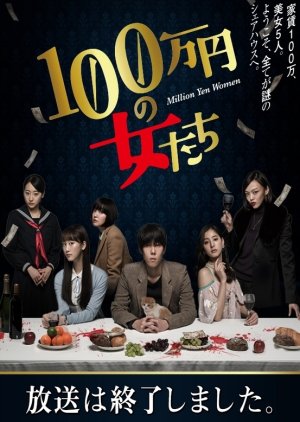 Where to watch : Netflix

Brief summary:
Michima Shin is a novelist that hasn't had much success. One day, five women show up to his house with invitations to live him from an anonymous person. The six people begin living together peacefully.
Michima Shin has to follow certain cohabitation rules and in return each women has pay him a huge sum of money equaling to 1 million yen a month. The strange living arrangement is a mystery to those living in the house and suddenly a tragedy strikes the house...

What I think:
I finished this show in two days, it's a pretty short watch and I really enjoyed it. The show combines a pretty solid story, good characters, and okay character development in a short amount of time. Each episode is only 24 minutes and there are 12 episodes. You may think that would be hard to have a complete story but this show really wrapped up well.

Lastly, all the actors did such a good job with their characters and Noda Yojira did a really good job as the male lead in this drama. This is the first time I've seen all of these actors and I will check out more of their work.